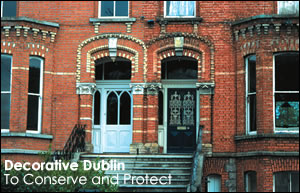 It is not alone as an artist and historical author of distinction that Peter Pearson is noted.  His role as a conservationist in the last three decades has had a tangible effect in protecting Ireland’s built heritage, and raising consciousness of the value and importance of conservation work.  In 1985 he and a group of historians and architects lobbied the government to conserve and regenerate Temple Bar, leading to its current status as Dublin’s cultural quarter.

Pearson identifies preservation of authenticity as integral to carrying out work on old buildings.

“That’s what’s been missing in so many cases in Ireland, unfortunately”, he stresses. “In a sense, the more original an aspect of a building is, the more valuable it is, whether you’re talking about glass in windows or plasterwork or shutters or floorboards”.

However, the decaying effects of time, often allied with negligence or misguided restoration work, can lead to situations where work must involve not only conservation, but faithful replication. For Pearson, such work should ideally involve a fidelity to the methods, styles and materials of the original craftsmen. “There are cases where to make a replica might be the only option. In such cases, all you can do is make a very good copy” he states.

As part of his continuing commitment to recording Dublin’s unique built heritage and in so doing highlight the necessity that it be preserved, Pearson has published Decorative Dublin, a substantial and scholarly work which enthusiastically profiles the quality and variety of decorative detail that exists in such abundance in the houses, buildings and streets of Dublin. The sentiment behind this work is perhaps best summed up in Pearson’s own words.

“It is now widely recognised that it was unfortunate, if not sometimes tragic, that so many old buildings were destroyed over the last thirty years, with the loss of much fine craftsmanship in stone, brick, iron, joinery and plaster, not to mention carved detail, mosaic, painted ceilings and stained glass. The destruction of traditional timber sash windows, along with their old glazing, has been so thorough and systematic that only a small fraction of original windows now remains in this country.

Little by little the decorative detail from the past will slip away unless it is looked after and cherished. Some buildings are being demolished and ornamental details are being overlooked and consigned to neglect. This book is an attempt to preserve not only the beautiful minutiae but also the larger decorative detail of Dublin’s unique cityscape.”


Published by The O’Brien Press, Decorative Dublin is available as a hardback in bookshops nationwide at €30